Simulation and analysis of the urban microclimate of the new design of Bubny-Zatory district, Prague

This project is part of the new territorial study of the Bubny-Zatory in Prague, Czechia by the Prague Institute of Planning and Development (IPR Prague). A new urban design is being proposed to revitilise the brownfield area for developing a green, liveable and extreme heat resilient urban environment in the Bubny-Zatory district.

For people living in an urban environment, the outdoor comfort is an important factor which supports high quality of life. Good outdoor comfort encourages social cohesion, healthier lifestyle and provides more opportunities for small commercial businesses to thrive and be more productive. Outdoor comfort of an given urban area depends on factors:

They can be influenced by several physical phenomena that occur in an urban microclimate which is the climate locally observed over an urban area. Usually it‘s significantly distinct when compared to the climate of a surrounding rural area. This is also called the urban heat island effect and it depends on the following aspects of an urban design:

The urban heat island is a phenomena which exacebates the impacts of extreme heat events like heat waves. Brownfields areas are particularly vulnerable to overheating during heat days.

Therefore, it is important to study the urban microclimate to ensure that any built environment is capable to provide high quality of outdoors comfort to the people living there and promote good quality of urban life.

For this project, a 3D model was developed from the architectural design of the newly developed Bubny-Zatory urban design and was simplified to LoD 2. Buildings, roads, sidewalks, courtyards and trees were placed according to their respective postions. Then the 3D model was divided into meshes (triangles for 2D surfaces and tetrahydrons for 3D volumes). Local meteorological data was provided from from Stanice Praha-Karlov weather station. Details of the surface and material proterties, leaf area index, leaf area density were provided. Irrigation from vegetated surfaces was assumed to be maximum.

With all the above mentioned parameters as inputs for the simulation, ECOTEN urban comfort s.r.o. was able to simulate the urban microclimate for the urban design and produced results for 5 extreme heat days and 2 average summer days. These days were selected based on the hottest consicutive days of the year 2018 when Prague experienced one of the most severe heat wave seasons of all times (according to the weather archives of the Czech Hydrometeorological Institute).

The urban microclimate simulation was performed using a software suite called SOLENE-microclimate which takes into account the coupling of a thermal model, thermal-radiation model and a computational fluid dynamics (CFD) model. For simulating the impact of evapotranspiration from blue and green areas, the Penman-Monteith equation for potential evapotranspiration. 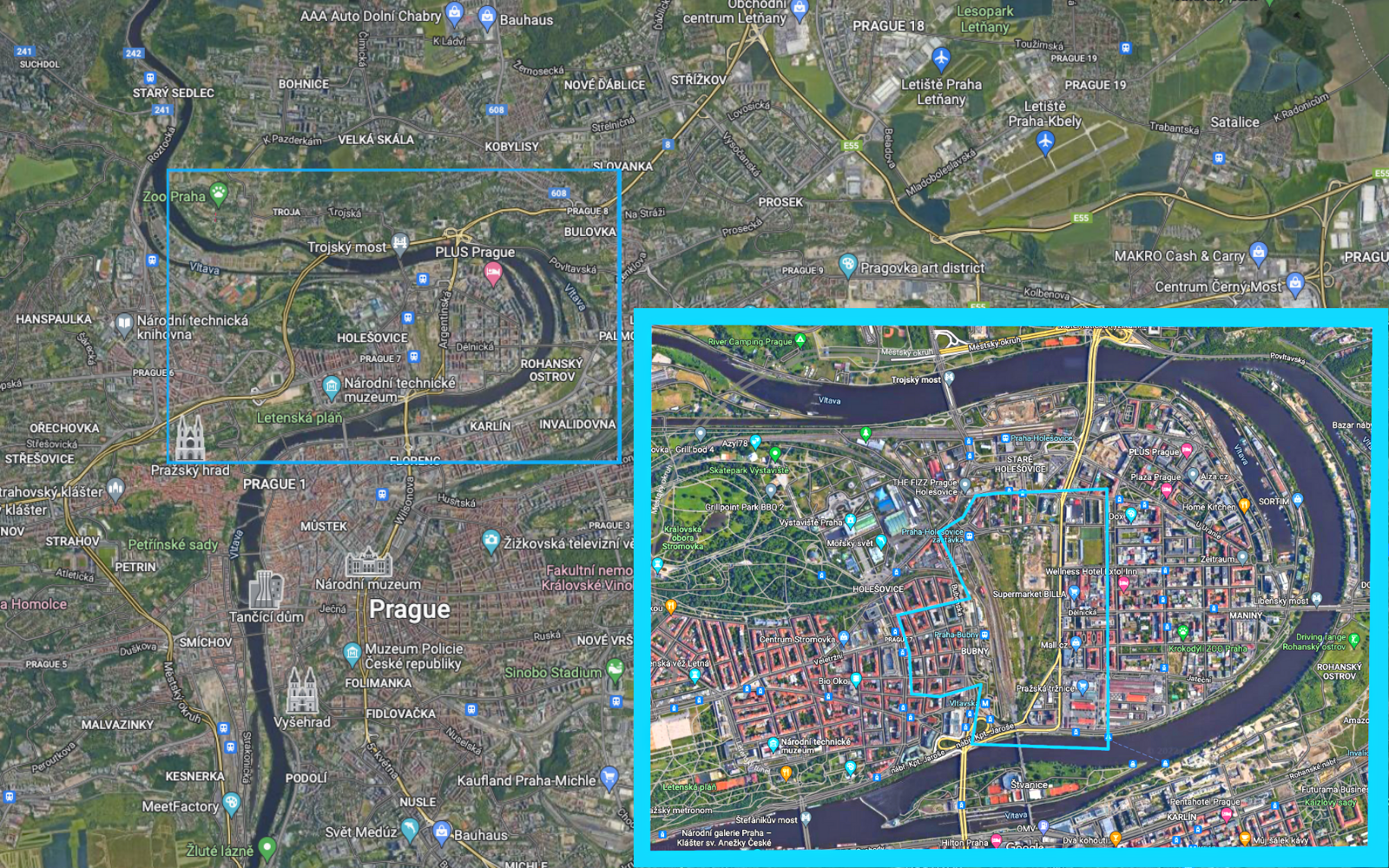 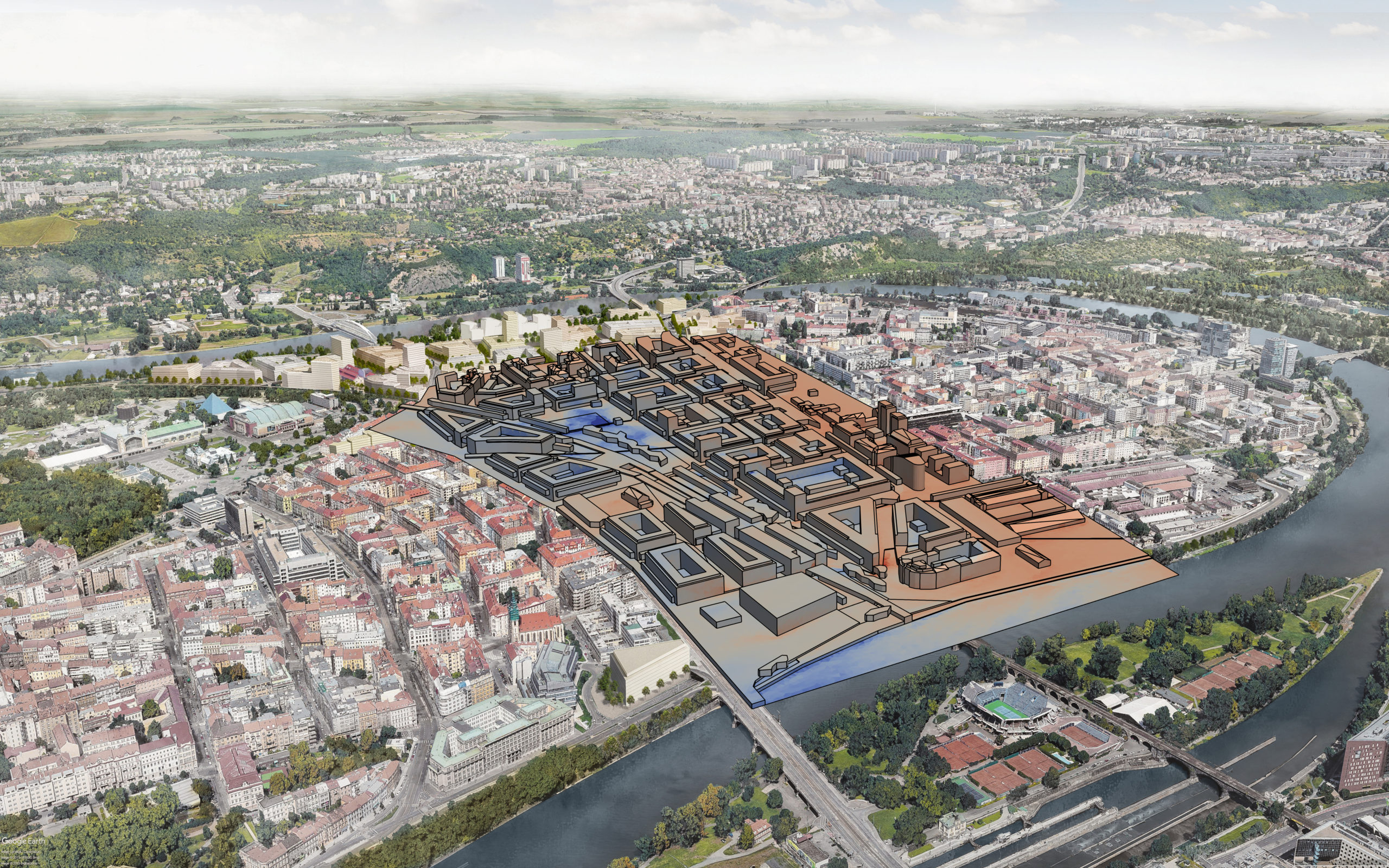 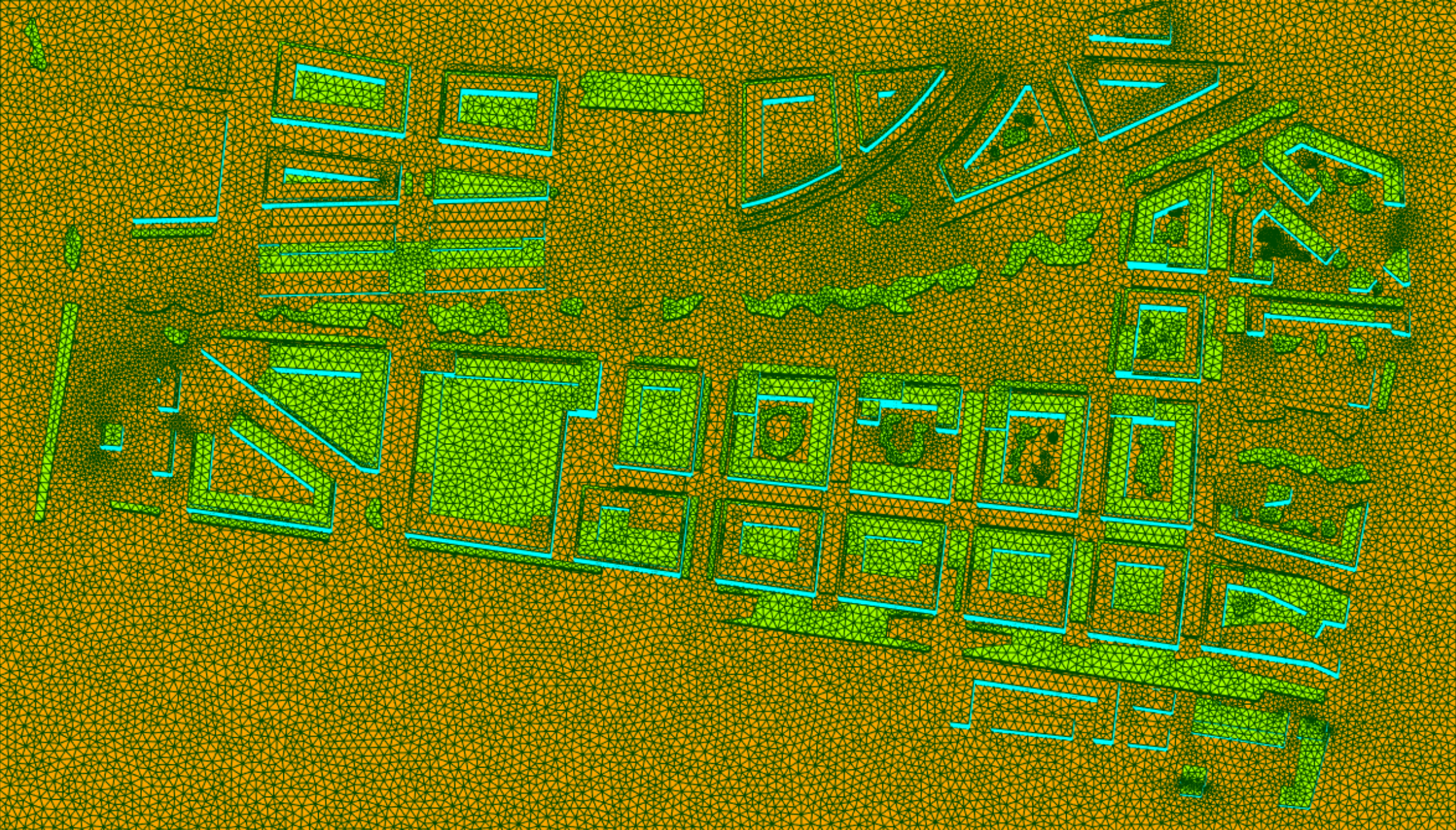 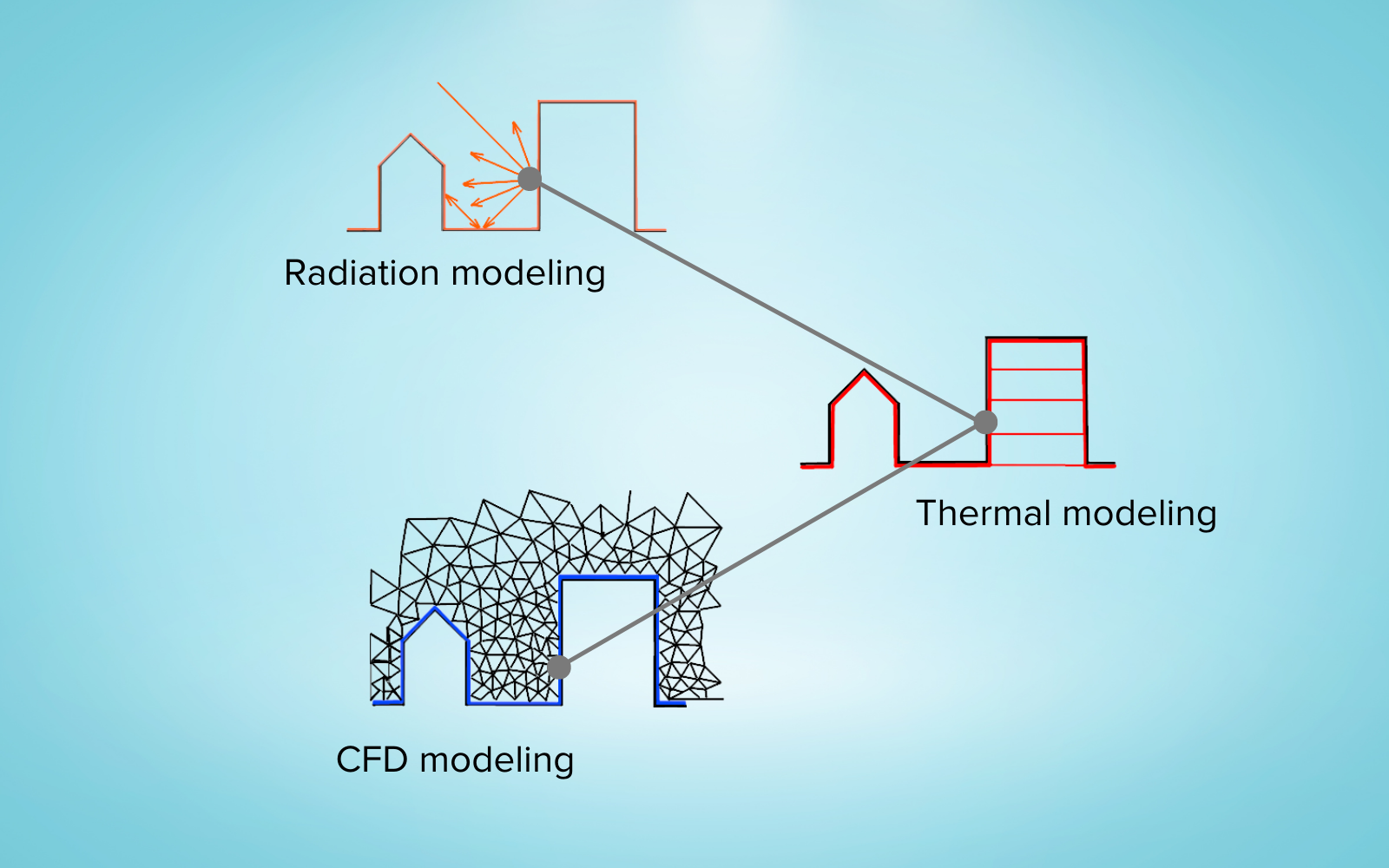 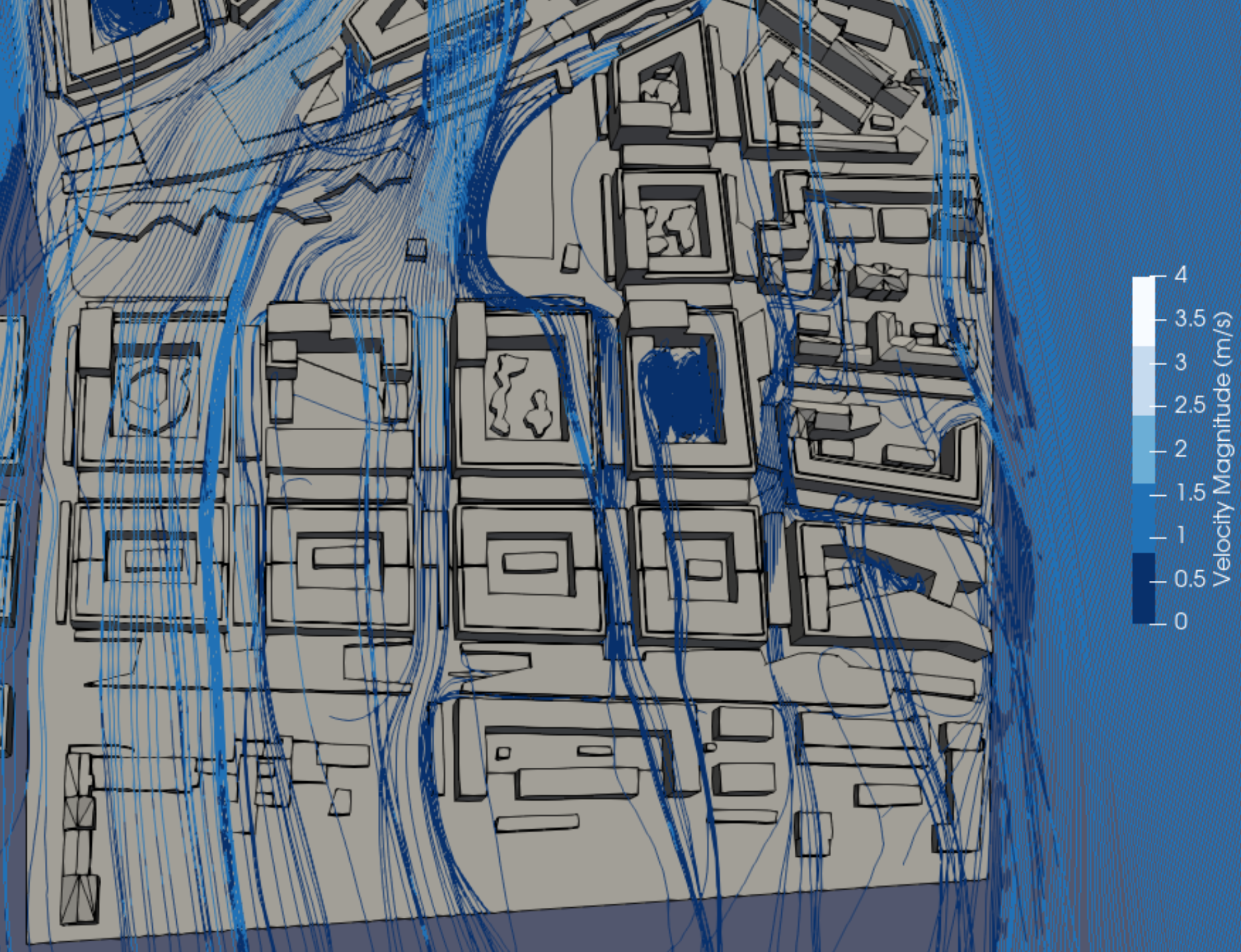 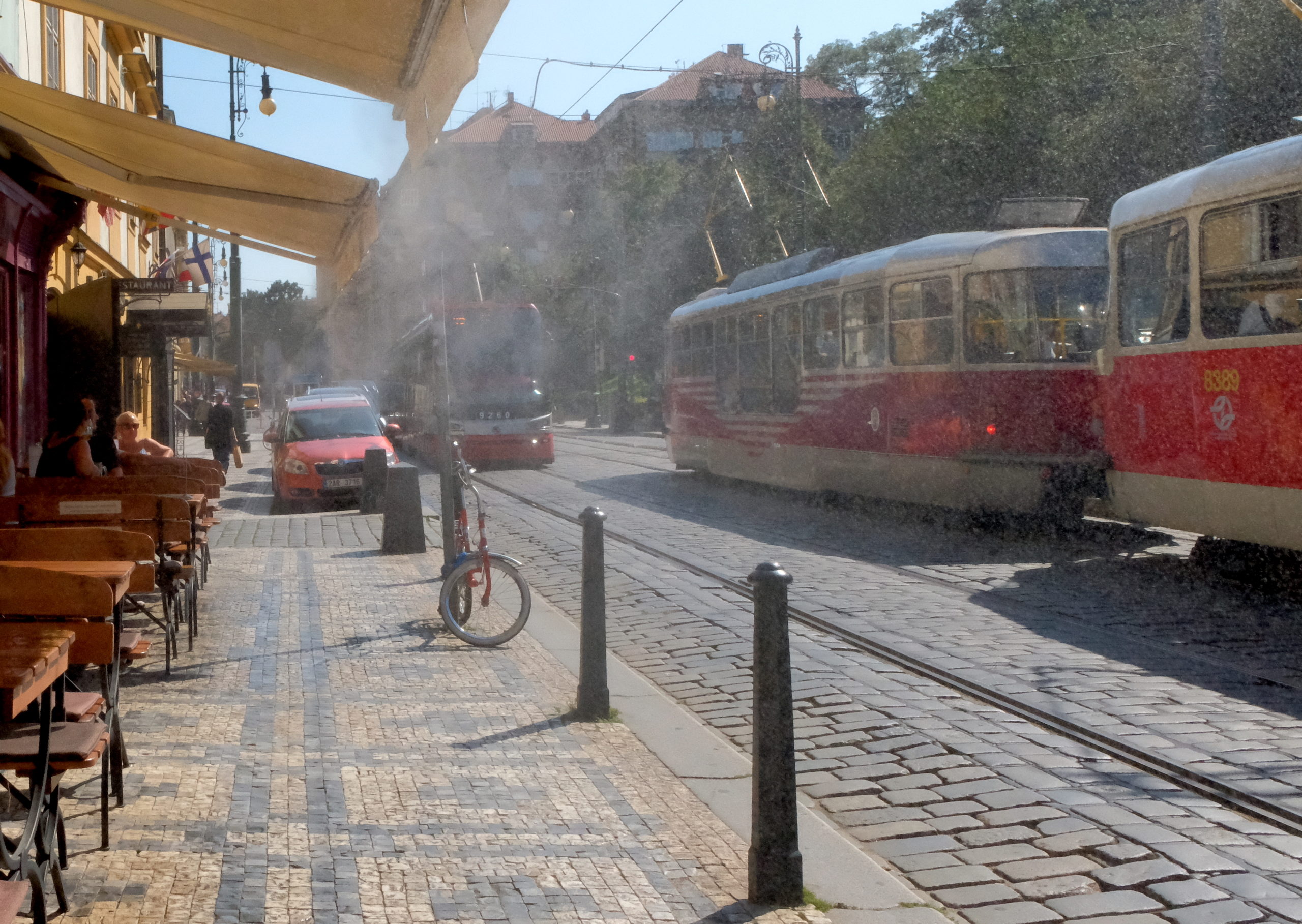 These interventions are recommended for the purpose of heat mitigation:

1. The proposed urban design should include more green lanes or row of trees within this street due to its observed overheating during an extreme heat day when the wind is not blowing from the river along the angle of this street (approximately between 120 to 150 degrees clockwise from North) or the opposite direction ( approximately between 30 to 60 degrees counter-clockwise from North)

2. In the proposed urban design, dark colour paint for outer surface of the buildings in this area should be avoided as much as possible due to its overheating within streets and courtyards.

3. The proposed urban design should include more green area or some water element (perhaps fountains) in this part of the design areas would help reduce the impact of the incoming heat from the east as much as possible.

4. The specific courtyard within this urban design area contributes to the formation of hotter microclimate island due to the lack of greenery here. Therefore, trees or green area or other cooling elements such as artificial shading are recommended to be implement in this area. 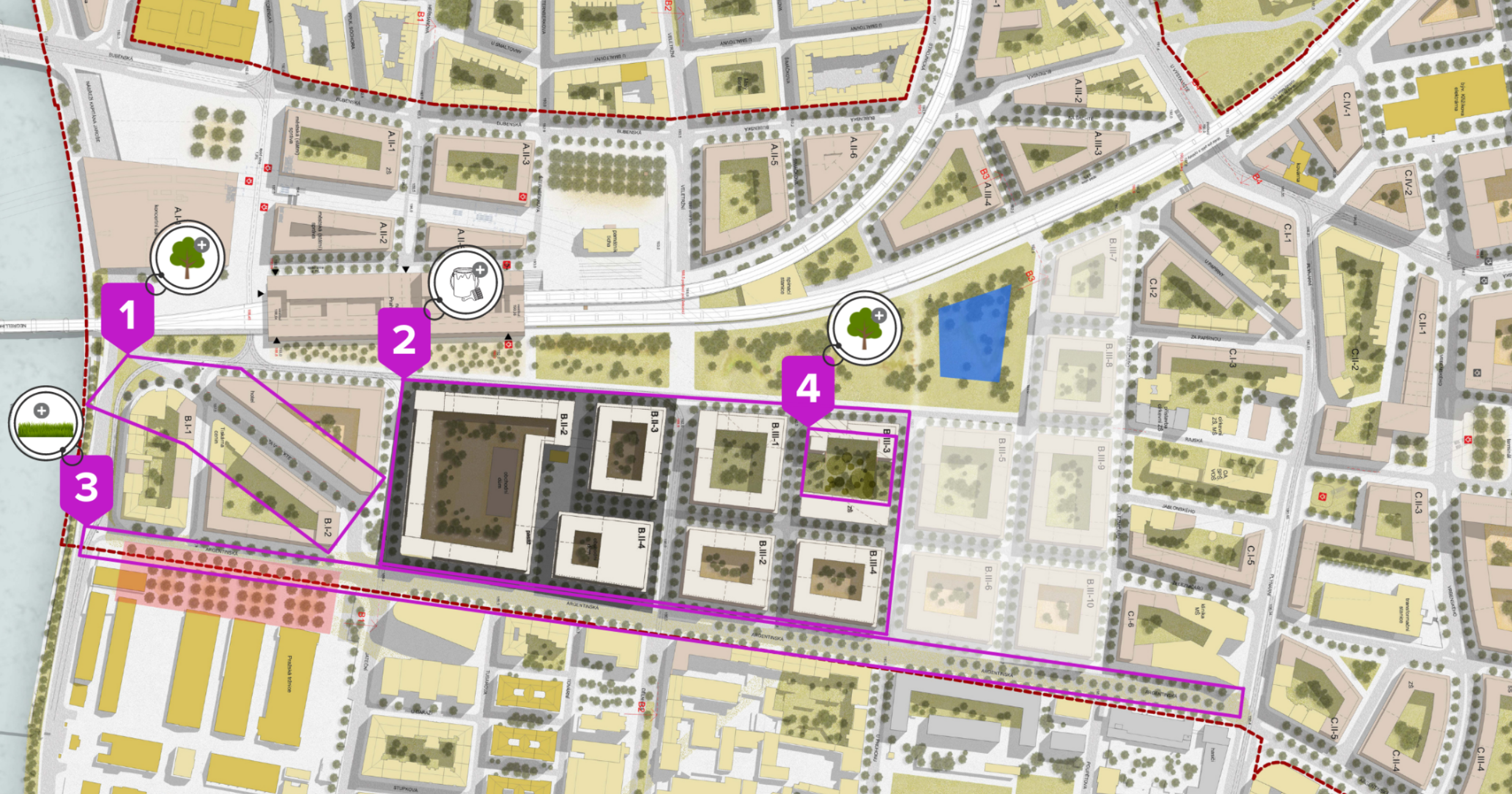 Download the presentation
Next
Categorization of Smart Railways Czechia SŽDC